How to Remove Limescale from Taps | 2 Easy Ways

As an Amazon Associate I earn from qualifying purchases.

Limescale, chemically known as Calcium Carbonate, is the white-crusty layer often found on taps or faucets. Limescale can generate for a number of reasons, but the most common reason is hard water.

Hard water contains high minerals like calcium and magnesium carbonate, sulfates, and others. When hard water leaves behind high minerals on taps, limescale produces and it does not just wash off.

So how to get rid of limescale on taps? As difficult as it may seem at first, removing limescale is fairly easy if you know the right cleaning agents and processes.

You don’t even have to run to the store, there are household cleaning solutions that work great in removing limescale from taps. In the following, we’re going to share two of the best ways to remove limescale from taps in your house.

Removing limescale from taps with Lemon and White Vinegar

It is vital to remove limescale from taps as soon as you have noticed it. Limescale can quickly grow and build upon your taps. If you don’t take action right away, chances are, it will get more difficult in time to remove. Here are two of the most effective guides on how to remove limescale on taps.

The best limescale remover is mild acids like citric, the main ingredient of a lemon. Yes, lemon is a natural, easy, and effective limescale remover that works in almost any limescale situation. To use lemon to get rid of limescale, you need a few things. 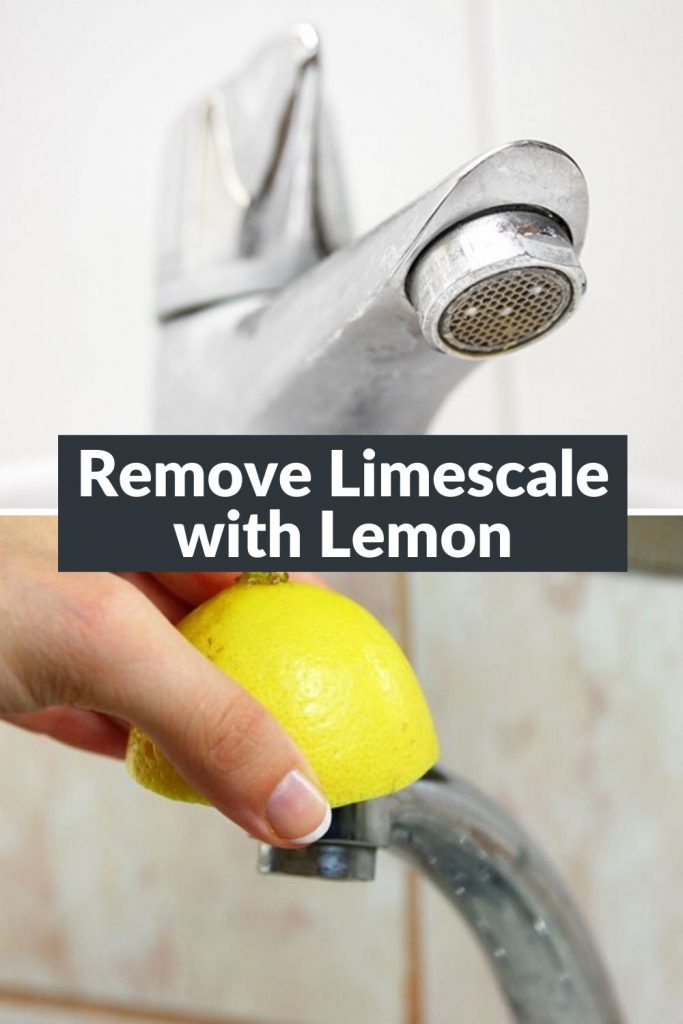 First, cut a lemon in half that’s rich in juice. Squeeze the lemon into a bowl to produce the extract. Take as many lemons as you need to create an adequate amount of the solution. Once it’s ready, take a kitchen towel and soak it well in the lemon juice.

Then put it around the tap, and make sure it covers the whole limescale area. In case the towel tends to slip, use a rubber band to make sure it stays with the tap.

Once you’re done, leave it for an hour or two. The lemon extract should be done with its work by then and remove the limescale. Take the towel off and wipe the tap clean with a fresh damp towel. Your taps will come clean and free of limescale.

Finally, pour hot water on the tap and its limescale-affected areas to clean off any remaining lemon and limescale.

Vinegar is a champion cleaning solution that works in almost any household cleaning needs and limescale is no different. It is a natural substance, easily affordable, and most importantly, rich in acetic acid which is great for removing limescale.

Compared to lemon, vinegar consists of higher acid content. So in stubborn limescale situations, vinegar is a great choice to go with. 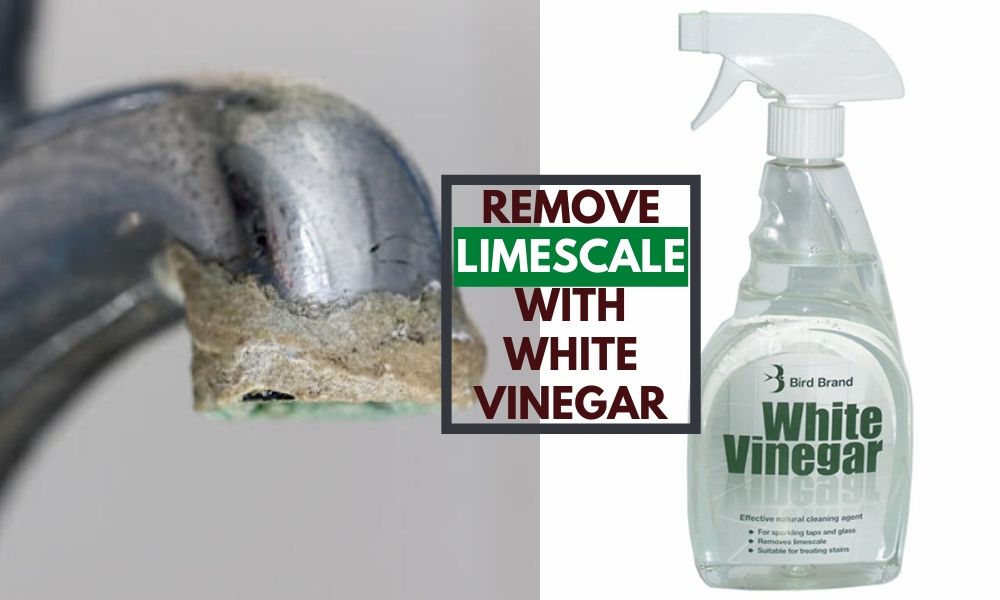 Start with directly pouring white vinegar into a bowl. You can also create a milder solution by mixing half of the part water with half of the vinegar. For difficult limescale problems, we recommend going with undiluted vinegar.

Soak a kitchen towel in the vinegar bowl. Remember to dampen it well and thoroughly. Like we did with lemon, wrap the towel around the tap and make sure it gets the total limescale affected area.

Use a rubber band if there’s any chance for the towel to slip or move. Once you got it to stick, leave the vinegar-soaked towel for around two hours to work.

Please take off the towel when it’s time. Rinse the whole thing thoroughly with water, you will see that the limescale is no more. Upon applying vinegar, it can leave a strong odour that you may find unpleasant.

To get rid of that smell, sprinkle some baking soda over the tap and its limescale-affected areas. Take a fresh towel, scrub the tap gently and the scent will come off eventually. Finally, rinse the tap with hot water to remove the residuals of limescale, vinegar, and baking soda.

Note: If you come across heavy limescale that does not clean off using any of the methods, try scrubbing gently with a toothbrush after you’ve applied vinegar or lemon. Remember not to scrub too hard so you don’t damage the tap and leave scratches.

You may be interested in Must-have house cleaning products

Since we have learned some conventional and effective methods to remove limescale from taps, here’s a pointer. Aside from the DIY cleaning agents we use, the two-pence coin, known as the 2p coin is great for cleaning off limescale. But how does a coin remove limescale?

It’s fairly easy and effortless to perform. Just take a 2p coin and scrape the limescale affected tap with it. You’ll notice magic happening firsthand, as the crusty-stubborn layer is coming right off.

This method is probably the easiest there is. After taking off the limescale, you can rinse the tap with some vinegar and water to brighten the thing. Before you get serious and get hard on cleaning the tap, who does not try the miracle 2p coin first?

Does white vinegar and bicarbonate of soda remove limescale?

Yes, you have to mix these two in two parts and use that on the taps. The mixture should look like a paste when you apply that. You need to leave the paste on the area for 10 minutes and then use a brush or sponge to scrub the area.

How do you get rid of thick limescale?

Thick limescale can be dealt with using baking soda, vinegar, or simply water. You have to mix until you get a paste and then apply the paste to the areas. Wait for about 10 minutes, and then use a brush to scrub it all off.

What will dissolve limescale?

Vinegar can remove the limescale in no time. You must soak the area with vinegar and wait 10 minutes for it to dissolve. Also, you can use lemon juice to treat the area. Both contain acid that can fight against the limescale.

Anything that contains acid can remove limescale. The acidic nature of coke will be effective in removing limescale as well.

Now you know that it’s easy to remove limescale from taps if you know the fitting solutions and how to apply them. Along with the unpleasant sight; this white, chalky substance can ruin your taps, faucets, pipes, or even sinks if you don’t take proper action in time.

Get rid of limescale on taps using our easy methods and maintain a clean, healthy household.

As an Amazon Associate I earn from qualifying purchases.

How to Clean Skirting Boards | The Quick and Easiest Way

How to Get Mold Out of Carpet | Easily & Naturally

How To Keep Bathroom Floor Dry After Shower | 13 Useful Ways

5 Steps To Remove Stains In Carpet That Keep Coming Back

How to Clean Soot Off Walls | In Just 10 Steps

How to Get Peanut Butter Out Of Carpet Using Household Ingredients

How To Clean Toilet Bowl Stains | 5 Quick And Easy Ways

How To Clean Grout On Tile Floor | 5 Best & Effective Ways

What Causes Yellow Stains On Toilet Seat & How To Clean

How to Remove Hard Water Stains From Toilet | 4 Best Ways

Cleaning Insider is a participant in the Amazon Services LLC Associates Program, an affiliate advertising program designed to provide a means for sites to earn advertising fees by advertising and linking to amazon.com. As an Amazon Associate I earn from qualifying purchases.

How To Keep Bathroom Floor Dry After Shower | 13 Useful Ways